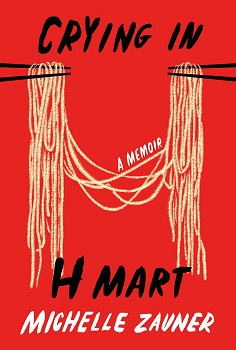 Crying in H Mart: A Memoir by Michelle Zauner

Michelle Zauner, the indie rock sensation who records as Japanese Breakfast, was only 25 years old when she lost her mother to cancer. Her mother, Chongmi, was 56 when she died. “It was the year her life ended and mine fell apart,” Zauner states.

In the aftermath of the loss, Zauner published a New Yorker essay entitled “Crying in H Mart” that went viral; this 2018 essay forms the basis for the first chapter of her new memoir by the same name. In it, Zauner explores her complex relationship with her mother, growing up biracial and Korean American, and how food is an integral part of remembering her mother’s life.

H Mart is an Asian grocery store where Zauner frequently shopped with her mother. The “H” stands for han ah reum, a Korean phrase that roughly translates to “one arm full of groceries.” After her mother’s death, Zauner returns to H Mart for traditional ingredients, but struggles to read labels as she doesn’t speak or read Korean fluently. She finds herself wondering, “Am I even Korean anymore if there’s no one left in my life to call and ask which brand of seaweed we used to buy?”

Growing up in a largely white, semi-rural area around Eugene, Oregon, Zauner—whose mother is Korean and whose father is Jewish-American—endured racist comments at school and not feeling Korean enough at home. Chongmi had high expectations of her only child, and Zauner’s adolescence was characterized by rebellion against these expectations. College on the East coast presented the opportunity to leave these expectations behind. As a student at Bryn Mawr College, she began fronting for indie pop bands and establishing a career as a musician.

With her mother’s cancer diagnosis, however, Zauner leaves this life behind to return to Eugene and help care for her mother through the first chemotherapy treatments, struggling with feeling inadequate because she is unable to prepare the foods that would sustain Chongmi—jjigae, tteokbokki, and other Korean delicacies.

As Chongmi grows weaker, Zauner and boyfriend and fellow musician Peter Bradley become engaged with the dream that Chongmi could attend her only daughter’s wedding, which takes place two weeks before Chongmi’s death.

After her mother dies, Zauner seeks solace by spending hours in the kitchen cooking complex meals. She becomes a regular devotee of a YouTube Korean-American cooking channel and learns to recreate traditional dishes. For their honeymoon, Zauner and Bradley travel to Seoul, staying with her mother’s family and visiting the places her mother longed to return to one last time.

Crying in H Mart is an unflinching, powerful memoir about love and grief, written by a talented young writer and musician. The songs on Zauner’s first CD, Psychopomp, were written during her mother’s illness, and the second CD, Soft Sounds from Another Planet, was created through the lens of grief. Her new CD, Jubilee, was released on June 4. Zauner says it is “a record about fighting to feel” and “recalling the optimism of youth and applying it to adulthood.”

Lisa Gresham is the Collection Services Manager at Whatcom County Library System which brings the power of sharing to rural Whatcom County. Visit https://www.wcls.org to place holds on library materials and learn about curbside holds pick up, in-person and other library services.