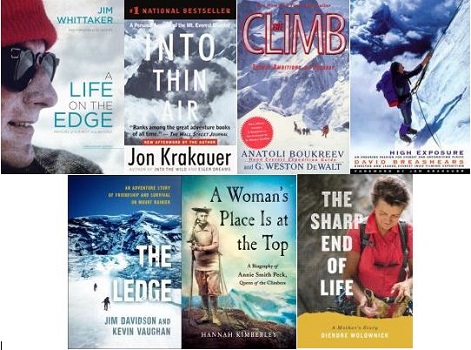 Book Buzz: If you Liked My Old Man and the Mountain by Leif Whittaker

You may have heard that it’s Whatcom County Library System’s 75th anniversary year, and to celebrate we’ve created the Read & Share program featuring Leif Whittaker’s excellent memoir My Old Man and the Mountain.

Whittaker is the son of “Big Jim” Whittaker, the first American to summit Mt. Everest in 1963. Leif has recreated his father’s historic climb and made it to the peak (twice). Thanks to a grant from the Whatcom County Library Foundation, he’ll be speaking at library events through mid-November.

Since I already reviewed the book for Cascadia Weekly in the winter of 2017, I thought I’d share some supplemental reading to prime you with good questions to ask Leif when you meet him. A good starting place is, of course, James Whittaker’s seminal memoir A Life on the Edge: Memoirs of Everest and Beyond. The 50th anniversary edition comes with more than 100 photos and an inside peek into the life of one of the men credited with launching the outdoor recreation industry. “Big Jim” is candid about his highs and lows. He also compares what it was like to return to Everest in his 80s, joining his son for the trek to base camp, versus his original journey in the 1960s.

Climbing Everest is not without its perils. In fact, there’s a whole Library of Congress subject heading for books with this theme: Mountaineering Accidents—Everest, Mount (China and Nepal).

Perhaps the most well-known is Jon Krakauer’s exposé, Into Thin Air: A Personal Account of the Mount Everest Disaster in which Krakauer details Everest’s deadliest season, in 1996. Nine people from four different expeditions perished in a single day. Krakauer was the first to call attention to the “pay to play” aspect of big mountain climbing, meaning those with big checkbooks pay professional guides to help them summit, often despite a lack of experience and ability that puts them and others at risk.

The Climb: Tragic Ambitions on Everest is Anatoli Boukreev’s rebuttal to Krakauer’s critique. Boukreev was the lead climber for Scott Fisher’s ill-fated Mountain Madness expedition. For another perspective, read David Breashears’ High Exposure. Breashears was on Everest in 1996 filming an IMAX movie and fortunately escaped tragedy. Breashears delves into his personal motivations for climbing such treacherous peaks and his passion for documenting his experiences through film.

For folks interested in climbing stories closer to home, The Ledge: An Adventure Story of Friendship and Survival on Mount Rainier by Jim Davidson chronicles his 1992 ascent of Washington State’s tallest volcano, which turned tragic when his best friend plummeted into a crevasse.

It’s not only men who are drawn to the adrenaline and challenge of mountaineering. A Women’s Place is at the Top, by Hannah Kimberly, is a biography of Annie Smith Peck, the first woman to ascend Mt. Shasta in 1888. When she climbed the Matterhorn in 1895 she caused a scandal by wearing pants when she did it. At the age of 60, she was the first person to summit Peru’s Mt. Huascarán.  Activist, feminist, scholar and mountain climber, Peck exemplifies the remarkable spirit needed to face the world’s tallest peaks.

The Sharp End of Life: A Mother’s Story tells Deirdre Wolownick’s story. At 66, she became the oldest woman to summit Yosemite’s El Capitan, accompanied by her rock-climbing rock-star son, Alex Honnold. Her journey from middle-aged single mom to marathon runner and accomplished climber is inspirational for all armchair adventurers and wannabe daredevils.

Christine Perkins is the executive director of the Whatcom County Library System (WCLS). For more details about Read & Share events, go to https://www.wcls.org/readandshare