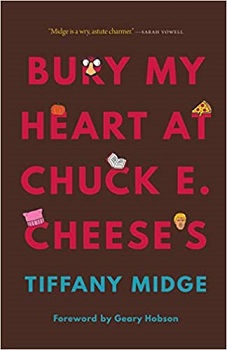 Bury My Heart at Chuck E. Cheese’s by Tiffany Midge

Tiffany Midge may be the snarkiest, funniest writer to pass through Whatcom County in recent memory. Bury My Heart at Chuck E. Cheese’s is a collection of satirical essays, observations and poems that look at the absurdity of contemporary culture, particularly as it pertains to Native Americans.

There’s something so thrilling about reading humor written by a really smart, opinionated and talented author—think David Sedaris or Lindy West—and Midge (pictured) provides a heady blend of laughs, political and social commentary, and poignant moments that cut right to the bone. Midge is a Hunkpapa Lakota enrolled member of the Standing Rock Sioux, and much of her work explores themes of identity and belonging.

If the book’s irreverent title is not enough of a hint, a quick scan of its table of contents gives a taste of what’s in store: “An Open Letter to White Girls Regarding Pumpkin Spice and Cultural Appropriation” and “Wonder Woman Hits Theaters, Smashes Patriarchy” and “Red Like Me: I Knew Rachel Dolezal Back When She Was Indigenous.” But mixed in with the puns and pop culture references are some pieces that make you go “oof,” like the opener: “My Origin Story is a Cross Between ‘Call Me Ishmael,’ a Few Too Many Whiskey Sours Packed in an Old Thermos at the Drive-In Double Feature, and That Little Voice That Says, ‘You Got This’.” Her reminiscences of her mother’s death also pull you up short with their honesty and humanity.

One of the tricky bits with satire is that its possible that readers won’t get it—which is what happened when Midge published an opinion piece in Indian Country Today titled “Thousands of Jingle Dress Dancers Appear at Standing Rock.” Despite abundant use of exclamation points, capital letters, hyperbole and outright ridiculousness—“Loretta Fast Elk commented, ‘the last time so many jingle dancers came together like this was…at that powwow we had in the gym two weeks ago’”—the story went viral and people from all over took it as fact. The joke’s on you, readers!

Midge ends the collection with some pieces that were written right after Donald Trump became President. For some, these may be old news, and for others they may be “funny, not funny” or even “too soon” to rehash. Midge reminds us that right after Trump was inaugurated, he selected a portrait of notorious “Indian killer” Andrew Jackson to hang in the Oval Office. The symbolism was not lost on her.

Though Midge now lives in Idaho, she taught writing at Northwest Indian College and several of her works have local references, such as Lake Padden and a secondhand clothing store near the Bellingham waterfront. Her writing has been published in McSweeney’s, Waxwing, and LitHub, among others, as well as numerous anthologies.