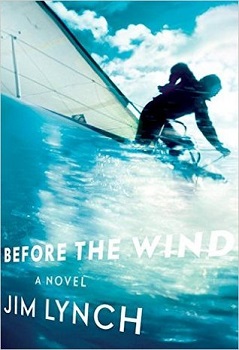 Before the Wind by Jim Lynch

Since then, he has written several fine books. Before the Wind continues Lynch’s tradition of finding the humanity in a lovable cast of eccentric characters and setting them in the glorious scenery of coastal Washington state.

As its title implies, Before the Wind is about sailing—and the mixed bag of racers, dreamers, salts and scalawags who are obsessed with sailboats and the sea.

The members of the Johannssen family tick all those boxes. There’s Bobo Johannssen Senior, aka Grumps, designer of fast, beautiful sailboats known as Johos. His son, Bobo Junior, is relentlessly competitive, a teller of tales who doesn’t hesitate to cheat if it will give him an edge. Junior’s eldest son Bernard is an excellent sailor with questionable morality, who may or may not be mixed up in some shady dealings. Junior’s youngest child, Ruby, has an almost mystical connection to the wind and no desire to use it to win sailing races. And Josh is the middle child, the only one to make boatbuilding his vocation.

The narrative is told from 31-year-old Josh’s point of view, as he ekes out his living in a rundown marina, hoping to find love and missing the closeness of his estranged siblings.

Josh’s description of the Sunrise Marina will resonate with anyone who’s spent time near the water, and will elicit a chuckle even with resolute landlubbers: “These docks were a magnet for every bad idea and flawed design on water…yet somebody somewhere, amazingly, kept paying moorage out of guilt, ignorance, or senility.”

His take on his live-aboard neighbors is equally humorous and realistic—the clueless couple with zero sailing experience plotting a circumnavigation; the broke romantic, crazy as a loon, who wants to install a grand piano in his moldy, dilapidated yacht; the beer-guzzling ne’er-do-well who can’t hold down a job but will help a buddy in a pinch.

But Josh’s real love is his family, with whom he spent every Sunday of his childhood, in boats rather than in church. Specifically, he misses Ruby, his gifted sister, for whom sailing comes as naturally as breathing. It all stems back to a fateful race, when, despite a huge lead, Ruby threw her chances of going to the Olympics by deliberately veering off the course.

Shortly thereafter, Ruby departed for the Peace Corps in Africa, Bernard took off for the South Pacific, and Josh’s family splintered. When Ruby calls and suggests they reunite for one last attempt at the Swiftsure Race, Josh jumps at the chance, with unforgettable results.

This is Lynch’s love story to sailing and the zany brotherhood of sailors. As with his first novel The Highest Tide, there’s an element of the supernatural afloat to keep things interesting and unexpected.

Christine Perkins is the executive director of the Whatcom County Library System (WCLS). WCLS is celebrating its 75th year of sharing stories with the rural parts of Whatcom County. If you live outside the city limits of Bellingham, you can apply for a WCLS library card at https://www.wcls.org/get-a-library-card