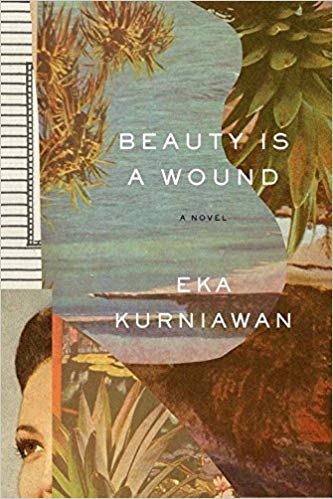 Beauty is a Wound by Eka Kurniawan

There are times when you happen upon a book and are completely blown away by its scope, craft and story. Eka Kurniawan’s Beauty is a Wound is just such a novel—sweeping, epic, with a vast but unforgettable cast of characters.

It’s reminiscent of One Hundred Years of Solitude, Gabriel Garcia Marquez’s masterpiece, earthy and ripe with magic, folklore and ghosts, only it’s set in Indonesia at the second half of the 20th century.

The novel begins when Dewi Ayu explodes from her grave, two decades after she died. Still beautiful but now wrinkled, the former “comfort woman” to Japanese soldiers is as stubborn and blunt as ever. She’s amazed to know the daughter she tried to kill in her womb, named Beauty, is not only alive, but is also 21 years old and three months pregnant.

“There is no curse more terrible than to give birth to a pretty female in a world of men as nasty as dogs in heat,” Dewi Ayu says, and what follows is a recounting of the many misfortunes and complicated histories of her four legendary daughters, told within the context of modern Indonesian history.

The story follows Dewi Ayu’s childhood at the outbreak of World War II. After the bombing of Surabaya by the Japanese, Oma Stammler, the grandmother who raised her, evacuates to Holland.  Forever headstrong, Dewi Ayu refuses to leave. Rounded up with other prisoners of war, she finds herself forced into prostitution at Mama Kalong’s brothel.

While the other girls quake and quiver, Dewi Ayu resolves to have the upper hand. She becomes the most sought-after whore in the city of Halimunda, and in short order gives birth to three beautiful but cursed daughters: Alamanda, Adinda, and Maya Dewi. Each experiences her share of violence, hardship and heartbreak, just like the fledgling country of Indonesia as it struggles for independence.

For those whose knowledge of this exotic place and time period is limited, Beauty is a Wound is a remarkable introduction. Kurniawan vividly evokes the smell of frangipani blossoms, the dampness of a mushroom farm, and a wedding celebration enlivened by seven groups of master puppeteers and kuda lumping trance dancing.

He takes us through Japanese occupation of Indonesia, the return of the Dutch and their subsequent overthrow, the roundup and massacre of thousands of Communists in 1965, and the 1975 invasion of East Timor. Halimunda is riddled with the ghosts of Dutch cacao plantation owners, Japanese soldiers, guerrilla fighters, con men, Communists, and thugs—and all the women they fell deeply in love with, obsessed over, exalted, raped and exploited.

Some readers may wish to map out the complex relationships between daughters, lovers, children—and even a dog—while others may be content to let the story unfold. The drama is both large and fantastical, but the author (supported by a deft translation by Annie Tucker) expertly brings the various threads together at the end.

Christine Perkins is the executive director of the Whatcom County Library System. Her grandmother, who died recently at the age of 100, was born on the Indonesian island of Belitung.