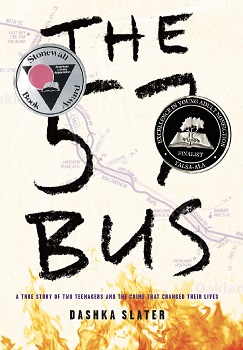 The 57 Bus by Dashka Slater

At Whatcom County Library System (WCLS), we believe that the act of reading offers readers a window into other people’s lives, and that reading develops empathy.

We host more than a dozen book discussion groups for the public each month at libraries across Whatcom County (see Events at https://www.wcls.org for dates and times). We promote the Whatcom READS program at the beginning of each year. And this year we decided to build upon staff training initiatives related to diversity by undertaking a system-wide staff book discussion; we selected The 57 Bus by Dashka Slater to read together.

This nonfiction title recounts the horrific moments of Nov. 4, 2013 on a city bus in Oakland, California, when two teens’ lives fatefully intersected.

The basic outline is this: Sasha, a white, upper-middle-class teenager who identifies as agender, fell asleep while riding the 57 bus home from school. Richard, an African-American high school student from the opposite side of the city and lower end of the socioeconomic spectrum, boarded the 57 bus with some friends.

Richard noticed Sasha, particularly the skirt Sasha was wearing. Spurred on by his friends, Richard flicked a lighter to the edge of Sasha’s skirt, which went up in flames. Sasha was rushed to the hospital with severe burns over a fifth of Sasha’s body. Eventually, Richard was arrested, charged as an adult for committing a hate crime, and sent to prison.

The spare facts of the story only hint at its complexity, which journalist Slater first presented as a feature in The New York Times Magazine in 2015. In this book version, Slater has room to explore what happened, and its implications, from all angles.

The narrative is separated into four parts: “Sasha,” “Richard,” “The Fire,” and “Justice.” Brief, poignant chapters are interspersed with lists and charts, poems, text messages and letters that add variety and interest.

Slater introduces vocabulary to build understanding of Sasha’s gender identity, sexuality and romantic interests. She details Richard’s upbringing, the hopes and dreams of his mother, and the sad reality of a life already touched by murder and violence. Slater interviews family members, friends and school officials for a thorough review of both teens’ lives prior to the incident and how they were both affected after the incident.

What first appears to be a book about gender and homophobia expands into a nuanced and open-ended exploration of race, class and the justice system. Slater is compassionate and descriptive, but not judgmental or sappy. She does not provide answers, but asks many questions—about the lifetime consequences of a momentary bad decision, about the value and possibilities of restorative justice, and about humans’ aptitude for redemption and forgiveness.