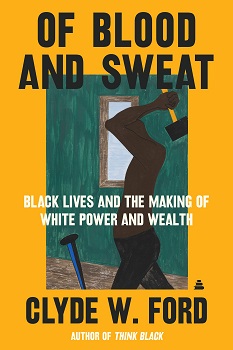 Of Blood and Sweat: Black Lives and the Making of White Power and Wealth by Clyde W. Ford

Over his distinguished writing career, Bellingham author Clyde Ford has entertained and challenged readers with his works of fiction and nonfiction alike. His previous book, “Think Black,” is a vivid portrayal of the intersection between technology and race, relating his father’s experiences as the first Black software engineer at IBM. “Think Black” garnered critical acclaim and was awarded the 2021 Washington State Book Award for Creative Nonfiction.

In his newest work, “Of Blood and Sweat: Black Lives and the Making of White Power and Wealth,” Ford meshes his storytelling talents with his skills as a historian, tracing the ways in which Black labor built the very structures and systems on which our nation rests.

The meticulousness of Ford’s research is evident from the first pages of the book. Readers are introduced to Philip Corven, a Black man and former indentured servant who, in 1675, argued for his freedom in the courts of colonial Virginia. Corven wanted not only to be free of servitude but also to receive “freedom dues,” a payment rendered in acknowledgment of his years of service, which were part of his original contract.

Corven’s case was eventually settled in his favor. In ruling for Corven, the court was acknowledging “a belief that power and wealth created from the labor of others entitled those who helped create that power and wealth to their fair share.” This system was a part of English common law, under which servitude was an agreement entered into by two parties, with both a definitive end date and an acknowledgement of service in the form of payment.

However, the Corven case was a bellwether of things to come. With the ever-increasing demand for labor in the colonies, white planters and settlers chafed at the constant need to find more workers with whom they must contract and share profits. The system, they felt, must change, and so it did.

In its early chapters, “Of Blood and Sweat” traces the fledgling nation’s seemingly inexorable slide toward slavery, revealing one by one the dominoes that needed to fall in order for this brutal hierarchy to take hold. Citing passages from historical documents and testimonies from various proceedings, Ford reveals how not only the legal system but also religion and culture played a role in creating and perpetuating slavery.

The book imagines the experiences of Anthony and Isabella, the first enslaved Africans to arrive in the colonies. Here the storyteller’s touch is evident, as Ford breathes life into scraps of history in order to embody the reality of what life must have been for them here, from their arrival to the backbreaking labor of working the tobacco fields.

Under slavery, a privileged few benefited from the unpaid labor of many. The influence of this oppression crept into nearly every area of American life. Black men, women and children bore the weight, and white institutions grew rich, as political and cultural systems became further and further enmeshed with the inhuman practices of enslavement. Even the nation’s founding documents owe a debt to the labor of Black lives, Ford argues, as without others to sow fields and harvest crops, would the framers have had time to debate such lofty concepts as freedom?

As the narrative progresses, the book continues to hold a lens to the past in order to better understand the realities of modern America.  Ford traces the country’s economic growth from tobacco to cotton and beyond, analyzing the rise of banks and white planters’ use of slaves as collateral for loans to cover their debts. Systems of infrastructure are similarly laid bare, including the role of Black labor in shipbuilding, import and export, and the construction of the nation’s railways, which some enslaved Americans later used as a ticket to freedom.

Of course, the codified system of slavery did eventually end. However, as the book explains, even the Emancipation Proclamation did not bring true freedom. The promise of “40 acres and a mule” was an empty one, rapidly abandoned in favor of keeping wealth in the hands of white elites. Though formerly enslaved persons eagerly grasped at their rights under Reconstruction, there were new means of oppression rising. We can see the effects of that oppression even today. “The terrible effect, the awful legacy, of Reconstruction on America is that the exercise of democracy by citizens is now too often met with the exercise of violence by the state,” Ford writes.

“Of Blood and Sweat” is an immensely readable account, blending sociopolitical analyses with the stories of real men and women whose lives influenced the trajectory of history. Through it all, Ford’s research supports his thesis: that the freedoms and wealth of white Americans came at the cost of Black lives, futures and security for their children and grandchildren. Even ardent students of history will find much to learn here, and much to consider.

Reflecting on his work in the afterword, Clyde Ford writes, “Looking back over that seeded earth, the main regret I have is that I couldn’t tell more stories of these human seeds, more stories of why Black lives mattered in the creation of America.” After finishing this compelling and thought-provoking history, one hopes that Ford returns to the telling.

Mary Kinser is a collection development librarian for Whatcom County Library System, where she spends her days spreading the joy of reading with communities across Whatcom County. She is a book reviewer for Bellingham Alive magazine and has served on the Whatcom READS selection committee for the past four years. She and her husband share their home with one son, one cat and far too many books.