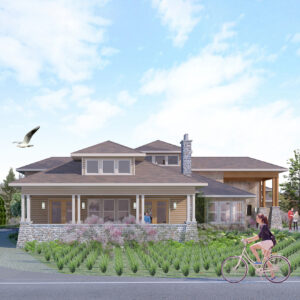 Birch Bay voters will decide if a new library will be built for their community in the Feb. 8, 2022, special election. If Proposition 2 passes, a Birch Bay Library Capital Facility Area (LCFA) will be established, allowing the LCFA board of directors to issue bonds to finance the construction of the library at 7968 Birch Bay Drive. The measure requires a supermajority of 60 percent to pass. In the November 2021 election, the LCFA missed passage by the narrow margin of 26 votes.

An LCFA is the method state law provides for funding a public library capital improvement project through property taxes. If the measure passes, property owners within the LCFA boundary will pay taxes of approximately 11 cents per $1,000 of assessed property value. For example, the owner of a Birch Bay property assessed at $350,000 would pay approximately $38 annually – the equivalent of $3.20 per month – in property taxes to fund the library. If the ballot measure passes, construction could begin in 2022. The new library could open as early as 2023.

As they do at their other 10 branches and bookmobile, Whatcom County Library System (WCLS) will provide staff, equipment, library materials and other services.

Currently, WCLS serves Birch Bay with weekly bookmobile service and WiFi. After community surveys revealed broad public support for a library building in the community, WCLS purchased the property at 7968 Birch Bay Drive in 2017 and began working closely with library supporters tasked with raising the necessary funds. The new library will be named the Birch Bay Vogt Community Library to honor the Vogt family, who had lived on the property since 1871. To ensure the design reflects the interests of the community, WCLS and Zervas Architects hosted public input sessions and met with key constituents. Visit wcls.org/birch-bay to see a fly-through animation of the proposed library and design schematics as well as a project overview.

Birch Bay is one of the fastest growing corners of the county. According to the 2020 Census, 10,115 people live in Birch Bay, a 20% increase from 2010. If Birch Bay was a city, it would be the fourth largest in Whatcom County. In addition to access to technology and the library’s collection of books, magazines, newspapers and DVDs, community members have expressed interest in library services such as job training and after-school, evening, weekend and summer programs – especially for children and seniors.