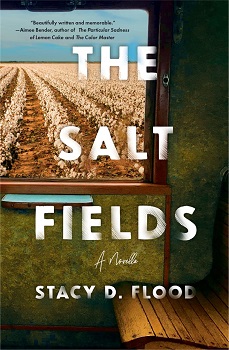 In spare prose with haunting images, Stacy D. Flood’s novella, “The Salt Fields,” tells of a Black man’s train journey north, leaving South Carolina with its ghosts and grief for a fresh start in the northern steel mills. Set just after World War II during the beginning of the great migration north, Minister Peters also hopes to leave behind the violence, discrimination and segregation experienced by Blacks in the South.

A private, taciturn teacher, Minister’s marriage ends when his wife — who accuses him of “only seeing the edges of things, never the center or the whole or the heart” — leaves him for another man, then tragically is murdered shortly after. In an “age when the murder of a Black woman didn’t warrant the pay, ink, or gasoline that it would take to investigate, especially should the evidence lead to anyone other than a Black man,” her murder was never investigated.

Minister is left to raise their young daughter, whose smile reminds him too much of his wife’s and consequently, the two of them smile less and less and often eat meals together in silence. When his daughter drowns in a neighbor’s well, Minister begins seeing the ghost of her “in every periphery and shadow” and hearing her calling “Daddy” in the sounds of the wind and the rustling of birds. Leaving South Carolina for good, he hopes “for the promise of great, steel-bending jobs and the opportunity for a different life, or at least fewer ghosts in the night air.”

On the northbound train, Dawn Lightning, Minister’s seatmate Carvall, a young Black man in full Army dress uniform, is also escaping the South and heading north to find “a good job up there and never look back. Steel mill. Milkman. I don’t care.” Soon, the bench seat across from them is occupied by Lanah and Divinion, a couple in name only who can’t seem to agree on anything — Divinion darker-skinned and talkative, Lanah elegant in a fine dress and pearls, or as Divinion describes her, “she’s a good person, but she can seem kind of uppity.”

Minister is attracted to Lanah in a detached sort of way, surreptitiously stealing glances and savoring the scent of her perfume. There are lengthy station stops along their route; at one, Divinion convinces Carvall to get a haircut (“you practically have a rug on your head”) and Lanah announces that Minister is taking her to a little catfish joint she has heard of that is near the station.

At another station stop, Divinion takes Minister to visit some of his family, only to leave Minister behind to find his own way back to the train. Minister catches a ride to the next station from Ryland, one of Divinion’s relatives, but traveling the roads at night in this part of the country is dangerous business for two Black men and apparitions of lynchings press close on all sides. Minister gets back on the train, but does Ryland make it back home? Ominously, Minister sees headlights converging on Ryland’s car as he drives away, but is powerless to do anything to help him.

Their final station stop adventure is to a “seriously jumping juke joint in the Virginia woods” that they heard about in the barber’s shop where Carvall got his hair cut. By this time, tensions between Carvall and Divinion are high, as is the feeling of impending violence that makes this venture feel doomed before it even begins.

Flood leaves readers with plenty of food for thought about the meaning of the title, “The Salt Fields,” the ways that the South has historically been toxic and lethal for many Black Americans, and how grief and loss can open up new horizons. As Minister reflects in his old age, “You lift one foot, put it in front of the other, and then repeat until you’re someplace else. Someplace you’d rather be. It’s about renewal.”

Flood will be the featured guest at the next Chuckanut Radio Hour at 7 p.m. Thursday, May 26 at the FireHouse Arts and Events Center, 1314 Harris Ave. He’ll be interviewed by Julie Trimingham, local author of the novella “Mockingbird.” Seats are limited; for more information, contact Village Books at villagebooks.com.

Lisa Gresham is Collection Services Manager at the Whatcom County Library System; visit wcls.org to experience the power of sharing at the library.