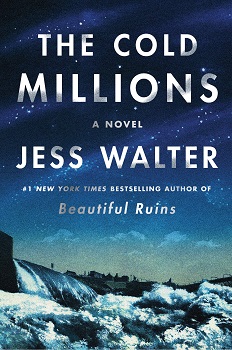 The Cold Millions by Jess Walter

Among the many excellent fiction writers in Washington state putting out great work these days—Jonathan Evison and Jim Lynch among them—Jess Walter (pictured) stands out for his ability to take on a wide variety of genres and excel in each.

Citizen Vince has a mobster-noir feel; The Zero is political satire; Over Tumbled Graves is a thriller. Perhaps his best-known to date, Beautiful Ruins, is a nostalgic love story. With The Cold Millions, Walter proves himself adept at character-driven historical fiction, delivering a timely lesson about the labor movement in Washington state and chronicling a bygone era where hardworking men could aspire to a comfortable life for themselves and their families.

First-generation Irish brothers Rye and Gig Dolan are just getting by in Spokane, Washington in 1909. Sixteen-year-old Rye dreams of buying a plot of land from his kindly Italian landlord so he can one day build a home of his own. Rye’s handsome older brother Gig is more world-weary and cynical, distracted by his romance with showgirl Ursula the Great and by his affiliation with the local Industrial Workers of the World.

The Wobblies, fed up by unfair labor practices, corrupt employment agencies and industrialists, and a system set up to exploit workers, have planned a series of civil disobedience actions in Spokane. Infamous agitator Elizabeth Gurley Flynn, the “East Side Joan of Arc” is in town, and Gig aims to join the fight. Rye, more of a pacifist, nevertheless gets sucked in to support his older brother. After a bloody confrontation with police, nearly 400 protestors are beaten and jailed, Rye and Gig among them.

Because union lawyers are quick to negotiate Rye’s release, Rye is pressed into service as a poster child for police brutality and inhumane prison conditions. Gurley Flynn enlists him to stir up support among hardscrabble miners and loggers at camps across the West. Inspired by Gurley Flynn’s charisma and perhaps her pretty face, and intent on doing what he can to free his brother from jail, Rye goes along. What ensues is an adventure tale complete with spies, assassins, scheming capitalists and anarchists, along with a downtrodden collection of vagrants, burlesque dancers, hobos and tramps “living and scraping and fighting and dying… the cold millions with no chance in this world.”

Walter skillfully weaves in historical detail with imaginary characters in plausible situations. The tone and sweeping scope are reminiscent of E. L. Doctorow’s Ragtime, while there are elements that make this feel more like a Western. It’s certainly very grounded in Spokane, which at the time was a boomtown at the “intersection of Frontier and Civilized.”

Walter’s compassion and warmth towards his characters is evident, particularly for Rye, who is after all, still a kid, doing his darnedest to help his brother and eventually live a good life despite the odds against him.

When Walter flashes forward to Rye reading Gurley Flynn’s obituary in 1964, we get a sense for how life has played out for Rye, and that history is cyclical. From the Spokane Free Speech Fight of 1909 to the Civil Rights Era of the 1960s to today’s Black Lives Matter movement, what’s old is new again, and the fight continues.