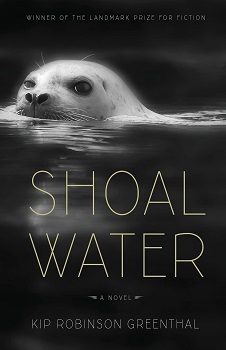 Meeting in 1971 at a Vietnam anti-war rally, Kate and Andy’s beliefs about U.S. involvement in Vietnam inspire them to leave New York City behind and follow their yearnings for a simpler life. Set in a small Nova Scotia fishing village where Andy’s family has a summer home, “Shoal Water” is an imaginative, atmospheric debut novel from Lopez Island author Kip Robinson Greenthal.

From the beginning, Kate seems uncertain about her radical, impulsive decision to leave with Andy, and is unsettled by much of Slate Harbour life that is unfamiliar — the smell of gasoline from the fishing boats, the marine pressure giving her a headache, the disorienting presence of the fog, and the ocean itself giving her a “vague sense of peril.”

It doesn’t help that Andy’s family home was previously owned by Basil Tannard, a fisherman who, in 1936, was lost at sea for a week and given up for dead, only to return to the village relatively unscathed with the story of being saved and cared for by a selkie. The villagers think Basil has gone mad, and Basil, unable to reintegrate into human society, drowns himself, leaving his ghost to wander the rooms of the Tannard house.

Eventually, though, Kate and Andy’s lives take on a simple harmony; Kate plants a garden and replaces her New York hippie clothes with plainer styles in order to fit in better with the women of Slate Harbour. She finds real friendship with Verlene, the wife of Andy’s best friend, Ivan, and with Ivan’s mother, Lena. Andy takes a job building dories. Kate agrees to marry Andy, but it is an agreement with a lot of unanswered questions. Does Kate really love Andy? Will she be happy staying in Slate Harbour?

Opening a bookstore together gives the couple a common purpose and the bookstore becomes an important place in the life of the community. While the book business and the birth of a son bring Kate and Andy happiness, Kate contends with an ever-present attraction to Ivan, an attraction that is mutual and only grows as Andy begins to drink more, staying up late with a second bottle of wine and never turning down an opportunity to drink rum with the local fishermen.

Shoal water — an in-between place that is neither fully land or sea, sometimes treacherous, a place where the unexpected can occur — is an apt metaphor for Kate’s life, caught between allegiance to the United States and Canada during the Vietnam War, between New York City and rural living, between two men. It is a place where rogue waves can develop, water changed by sudden shallowness and made turbulent, and this story does have its share of both real and metaphorical rogue waves.

Kate, Andy, Ivan and Lena have all experienced loss and how they choose to navigate these losses gives “Shoal Water” an interesting texture. Andy’s father was murdered shortly before their move to Nova Scotia — his father worked for the CIA and had some information about the Vietnam War that lent suspicion to his murder — and Andy drinks both to fill this loss and assuage his anger.

Kate’s mother often told her that the happiest times of her life were two summers spent on the Nova Scotia coast, and saying “yes” to following Andy was in large part Kate chasing the ghost of her mother’s happiness. Ivan’s now-sober father, Will, was drunk and abusive to Ivan when he was a child, and Ivan suppresses these memories and is emotionally distant from his father. And Lena, Ivan’s mother, has chosen forgiveness and the grace of new beginnings as her path forward out of loss.

While not exactly a romance novel, the many shapes love can take is a central theme of “Shoal Water;” fractured love, dissolving love, the love between parents and children, the buoyant love of friendship, and in the case of Ivan and Kate, the “restraint of love.” Readers will find themselves deeply drawn to the simplicity of life in this remote location, and to the lives of these characters, struggling to find their way free of multigenerational traumas and navigate their hopes and losses.

Read the book and then “meet” the author at a Village Books’ Zoom author event at 6 p.m. Tuesday, March 22 when Kip Robinson Greenthal will discuss her book with bestselling author Brenda Peterson, who calls “Shoal Water” a “haunting, lyrical, and startling debut novel.”

Lisa Gresham is Collection Services Manager at the Whatcom County Library System; visit wcls.org to experience the power of sharing … at the library!