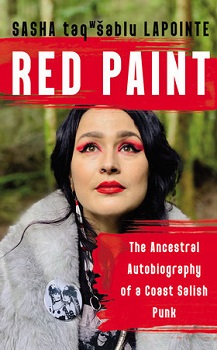 An Indigenous artist from the Nooksack and Upper Skagit Indian tribes, Sasha taqʷšəblu LaPointe, shares her story of trauma, healing and the search for home in “Red Paint: The Ancestral Autobiography of a Coast Salish Punk,” a vulnerable and luminous debut set against the backdrop of Coast Salish ancestral land.

Tracing her lineage back through several generations of wise and resilient women, including her great-grandmother, Comptia Koholowish, a prominent Lushootseed linguist and storyteller, LaPointe applies a punk rock aesthetic to her rich ancestral history.

A dominant theme of “Red Paint” is LaPointe’s longing for a permanent home. As a child, LaPointe’s family moved frequently, often living in temporary housing that felt and sometimes was dangerous for Sasha. In her teens, LaPointe began running away from home, which led to a different type of nomadism — sleeping in abandoned buildings with other teens or couch surfing at friend’s houses, further fueling her longing for a safe, permanent home.

LaPointe takes inspiration from her great-great-grandmother, who always carried a square of linoleum that she rolled out wherever the family landed and created a home around. One of the ways LaPointe contends with feelings of impermanence is by arranging objects that have deep meaning to her in her temporary homes — a can of salmon that was a gift from her grandmother, stones, candles — to create a sense of rootedness and belonging.

These same ancestors had their ancestral lands taken from them and LaPointe recognizes ways this generational settler-colonial trauma has impacted her own life, amplifying the haunting feelings of impermanence she has experienced. She writes, “I realized I wasn’t sure what permanence looked like because we weren’t meant to survive.”

LaPointe began exploring the trauma caused by sexual assault experienced when she was young while working on her graduate program thesis at the Institute of American Indian Arts. While ultimately a healing process, writing unleashed other memories of trauma.

LaPointe realized that she was suffering from what is described by her tribe as “soul sickness,” a belief that when your spirit is angry, it can actually abandon you. Of that time, LaPointe says “I had excavated the bones of these memories, unaware that they would reanimate, that they would chase me into dreams.”

LaPointe calls “Red Paint” an “ancestral autobiography” because her story is inextricably entwined with and inspired by stories of the women in her family. The Coast Salish punk element refers to her embrace of punk culture and community as a teenager. She also sees her great-grandmother’s language revitalization work as a sort of punk activism, taking a stand against cultural erasure and refusing to assimilate to the status quo.

If you liked “Sharks in the Time of Saviors” by Kawai Strong Washburn, which is fiction but also a resilient survival story that addresses the generational trauma of colonization, “Red Paint” feels like its memoir close relation.

Learn more about “Red Paint” on Thursday, April 14 when LaPointe will be the featured guest at the Chuckanut Radio Hour at the FireHouse Arts and Events Center in Fairhaven. Find out more about the event at villagebooks.com.

Lisa Gresham is Collection Services Manager at the Whatcom County Library System; visit wcls.org to experience the power of sharing — at the library!