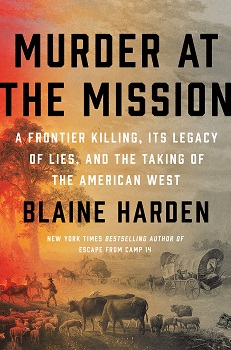 Murder at the Mission: A Frontier Killing, Its Legacy of Lies, and the Taking of the American West by Blaine Harden

Whether you’re a “Whittie,” know someone who attended Whitman College, or have never heard about early Washington pioneer Marcus Whitman, you’ll still find much to learn by reading veteran journalist Blaine Harden’s deeply researched work, “Murder at the Mission: A Frontier Killing, Its Legacy of Lies, and the Taking of the American West.”

The book is a thorough exploration of the troubled mythology of the settling of the Pacific Northwest and its devastating impact on native peoples. It centers around the oft-repeated tale that Marcus Whitman was himself singularly responsible for “saving” Oregon Territory from the British, allowing Americans to achieve Manifest Destiny.

As legend goes, Whitman, a medical doctor and ordained Presbyterian minister, was happily leading his congregation on the banks of the Walla Walla River when he learned of a plot by the British to wrest control of the Northwest from the American public. He charged east on his horse through bitter storms, arriving in Washington, D.C. to persuade President Tyler to grant federal support for westward expansion.

Whitman’s grisly death, and the deaths of his wife and 11 other white settlers at the hands of five Cayuses in 1847, solidified his martyrdom. Tales of Whitman’s alleged heroism spread and inspired the formation of Whitman Seminary (later Whitman College) in 1859. No less than Supreme Court Justice William O. Douglas, himself a Whittie, once proclaimed that Whitman’s legacy should, “fill the hearts of our people with pride and teach them that courage and devotion can overcome the impossible.” Too bad most of it wasn’t true.

As Harden painstakingly recounts, Whitman was an ineffective missionary, failing to convert more than a handful of Native Americans to Christianity in 11 years in Oregon Country. His relations with the Cayuse tribe deteriorated over time. His fabled ride to Washington was a desperate plea to keep his job. His death may have been a reaction to his inability to cure tribal members of smallpox, or to his ceaseless boosterism for white settlement.

Harden shows that Whitman’s contemporaries were aware of his shortcomings. Fascinatingly, rival missionary Henry Spalding is the one who took up Whitman’s mantle, making it his life’s work to discount the naysayers and honor Whitman. Spalding was largely successful, despite his mercurial nature, anti-Catholic sentiments and proclivity for conspiracy theories promulgated by his fellow Know-Nothings.

Later, Stephen Penrose, Whitman College’s third president, uncovered Spalding’s account and furthered it in an attempt to save the college from bankruptcy. Today, Whitman College is solvent, secular and has distanced itself from its namesake. A bronze statue of Whitman in buckskin was quietly moved to a nondescript location and is now being considered for removal by the Walla Walla City Council.

While “Murder at the Mission” sounds like the title of a paperback whodunnit, the only mystery in Harden’s well-researched account is why so many people continued to promote a false narrative about Whitman despite much evidence to the contrary, and why so many are loathe to acknowledge the profound effect that American settlers had in displacing native peoples such as the Cayuse and Nez Perce.

For another author’s perspective on the Whitman story and its impact, read “Unsettled Ground: The Whitman Massacre and its Shifting Legacy in the American West” by Cassandra Tate. “Murder at the Mission” is available at your local libraries in book, audiobook and eBook formats.

Christine Perkins is Executive Director of the Whatcom County Library System, which serves all the communities in Whatcom County outside the city limits of Bellingham. Visit wcls.org to experience the power of sharing — at the library!