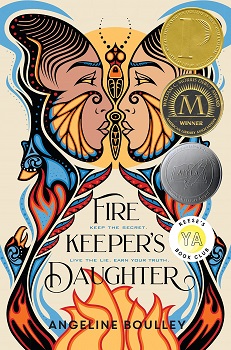 If you’re in the mood for a satisfying, twisty thriller laced with contemporary and traditional Native American culture, Angeline Boulley’s debut novel starts with a bang. Eighteen-year-old Daunis Fontaine is the titular “Firekeeper’sDaughter,” half Ojibwe, half French/Italian/English, and entirely herself.

A talented hockey player and aspiring doctor, Daunis has made the tough decision to defer admission to the University of Michigan so she can stay in Sault Sainte Marie to help care for her ailing grandmother. Her mother, devastated by the recent death of her brother, is overjoyed that Daunis will remain at home, as is Daunis’ friend, Lily.

Though Daunis is resigned to her choice, she’s never felt like she fits in. She’s a descendant of the Sugar Island Ojibwe tribe, but because her affluent white grandparents were ashamed by her mother’s illegitimate pregnancy, she’s not an enrolled member. She played on the men’s varsity hockey team in high school, but she’s not one of the guys. Wary of smooth-talking hockey players who spout Guy Lies, Daunis tries to keep Hockey World and Regular World from overlapping. But when a good-looking new player joins the local Junior A team, Daunis finds it harder and harder to do that.

Then, bang, Daunis witnesses a horrific murder. Shocked and angered, she is drawn into an undercover investigation of a drug ring that’s distributing a wicked, hallucinogenic strain of methamphetamine. People are overdosing in reservations across the Upper Peninsula. Daunis must use what she knows about traditional medicine and modern chemistry, as well as her understanding of family connections, to unravel the truth and save her community.

Boulley says she wrote this novel “because there are simply too few stories told by and about Native Americans, especially from a contemporary point of view. We exist and have dynamic experiences beyond history books or stories set long ago.”

The author excels at showing us Daunis’ traditional heritage juxtaposed with modern settings and situations. For example, Daunis brings elders offerings of semaa (tobacco) before asking them about special places and native plants on Sugar Island. Then she teaches them how to download their favorite songs from iTunes.

“Firekeeper’sDaughter” portrays the larger Anishinaabe community in all its complexity, with characters who are educated and financially secure, as well as those who are scraping by, those with shady dealings with narcotics dealers and those who are focused on bringing them to justice. Some are hockey-obsessed and others are more interested in powwows and jingle dances. Boulley shows how Daunis loves and respects the members of her community even as she acknowledges their weaknesses and struggles.

Boulley worked on her novel every morning for nearly 10 years before heading to work as the Director for the Office of Indian Education at the U.S. Department of Education. Once it was complete, it sparked a bidding war and landed Boulley a lucrative contract, as well as interest from Barack and Michelle Obama’s Higher Ground Productions company, which is adapting the book into a Netflix limited series.

“Firekeeper’sDaughter” is available in many formats for readers and listeners; visit wcls.org to place a hold on the book, audiobook on CD, eBook or eAudiobook.

Christine Perkins is executive director of the Whatcom County Library System, which serves all the communities in Whatcom County outside the city limits of Bellingham. Experience the power of sharing — at the library!