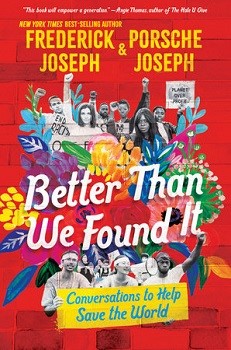 Better Than We Found It: Conversations to Help Save the World by Frederick and Porsche Joseph

Intended as an introduction to topics of the day for a teen audience, adult readers of “Better Than We Found It: Conversations to Help Save the World” by Frederick and Porsche Joseph will appreciate this inspired examination of society’s most pressing problems, and gain a better understanding of and appreciation for the Gen Z psyche.

The Josephs take turns presenting 16 of the most crucial issues of our time, digging deeper into each through interviews with prominent people knowledgeable about the topics. The result is an intimate and inspiring call to action. References throughout point to a glossary of terms, source notes and an online toolkit with suggestions for further reading, viewing and organizations whose work relates to each chapter’s topic.

Although the Josephs currently reside in New York City, Porsche grew up in Seattle and shares how a middle school friendship with a girl whose family lineage was Yakama Nation/Makah Tribe opened her eyes to the terrible legacy of cultural genocide. Porsche concludes this chapter on “The Importance of Addressing Indigenous Land Theft” by interviewing her childhood friend, Andrea Tulee, now a community leader on the Yakama Reservation, where she runs a nonprofit promoting culture and language revitalization.

In the chapter “We Shouldn’t Be Afraid to Leave Home,” Frederick describes the way he was bullied as a young person growing up in Yonkers, New York, and shares his personal story of how gun violence destroyed the lives of several youth in his neighborhood.

In the aftermath of their judicial sentences, Frederick laments the fact that during the process, no one asked why a teenager who was living on the street could so easily buy a gun for $50, or the part that bullying played in this particular tragedy, or the systemic racism that contributes to trauma in children of color. Interviews with Shannon Watts, founder of Moms Demand Action, and Brandon Wolf, a survivor of the Pulse nightclub shooting, show the power of joining our voices to say “enough” to the epidemic of gun violence.

Despite the gravity of the subjects, throughout is the hopeful message that young people today do care deeply about these topics. Data on Gen Z youth compiled by the Pew Research Center indicate that diversity is their norm — they grew up with the first Black president and witnessed the legalization of gay marriage. They are likely the last generation that is predominantly white (52%). More than any generation, they’ve had to deal with high levels of mental and emotional stress; beyond the COVID-19 pandemic, they are also inheriting social issues like health care reform, police brutality, climate change, the spread of disinformation through social media and more that are covered in this book.

In Porsche’s interview with economist and former United States Secretary of Labor Robert Reich, in the chapter “The Damage Caused by the Wealth Gap,” Reich comments on the young people he has taught in the classroom for the past 40 years, saying he has never taught young people “as diverse or as committed to equal opportunity and improving the possibilities for everyone, regardless of race or ethnicity or gender” as this current generation of young people.

I found these candid stories to be full of hope, and the interviews an inspiration to take action on one of these pressing topics of our time and try to inspire change. Frederick sums it up at the end of the chapter on the devastating gun violence in the U.S. with the invitation that “it isn’t about where you start, but rather that you just start somewhere.” All in all, “Better Than We Found It” is a great first footstep on that journey, for readers of all ages.

Lisa Gresham is the collection services manager for Whatcom County Library System. Visit wcls.org to reserve a copy of “Better Than We Found It” and to learn more about the power of sharing at the library.